This is the part I don’t get: Former President Bush brought us to financial ruin in eight years, and people think President Obama has failed because he couldn’t (yet) restore job growth in less than two years. On top of that, people think the problem is that Democrats are spending too much and the Republicans will restore fiscal responsibility. The facts don’t really support that dream.

First, President Obama has not expanded the federal government. And TARP, under his administration (see my previous post), has actually recovered most the of the money that was given out.

Second, and more importantly, Fareed Zakaria recapped it well recently when he said it is not the Democrat’s “tax and spend” that got us here but instead the Republicans “borrow and spend.” He points out,

During the Reagan administration,  there was a reform of the tax code “bringing marginal tax rates way down and eliminating hundreds of loopholes. But the spending cuts never took place. The result: from 1981 to 1985, the federal budget deficit more than doubled as a percentage of GDP, and it declined slightly in Reagan’s second term only because he agreed to tax increases.

If Republicans were really serious about cutting spending, they had a golden opportunity after 2002, when they controlled all the levers of government in Washington. The result was the most reckless expansion of government spending and debt in two generations.

Bush made three big decisions: to cut taxes, give prescription drugs to the elderly and fight two wars. Crucially, he decided not to pay for them. (“Reagan proved that deficits don’t matter,” Dick Cheney famously told Secretary of the Treasury Paul O’Neill.) As a consequence, the U.S. went from having a large structural surplus in 2000 to a structural deficit that was close to 2.8% of GDP by the end of the Bush presidency. (A structural deficit is one that exists even in good times, as opposed to a cyclical one that is caused by a recession and the resulting drop in tax revenues.) After the 2008 recession came along and tax revenues plummeted, that deficit more than doubled. But the hole was created well before the collapse of Lehman Brothers. 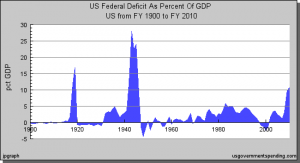 So, let us take a look at the graph at right. It points out that the budget deficit by percentage of GDP has actually fared worse under Reagan and the Bushes. It also points out that the deficit is not near as bad as during the Great Depression. See this fine site for more informative graphs.

Now, unlike former Vice President Cheney, I’m not saying that a big deficit doesn’t matter. But I am saying that the numbers don’t really align with the rhetoric.