Tonight’s inquiry: Who really holds the much discussed US debt? Well, I took a look first at what the total debt was right now. The total is $14.7 trillion and counting of course. But, what was a little shocking was that next to that number was a calculation divvying up the debt to $47K per person! That’s quite a bit higher than the $30K number I reported in 2008. Yikes! I’ll have to delve into the differences later, but you can see a graph of how steeply debt/citizen had risen here, which is on a fine site chock full of interesting information on the debt.

Anyway, I just wanted to get the essential idea of who held US debt, so using some rough figures from the US Department of the Treasury, I put together this little graph. Its not meant to be 100% accurate, just to give the relative proportions. 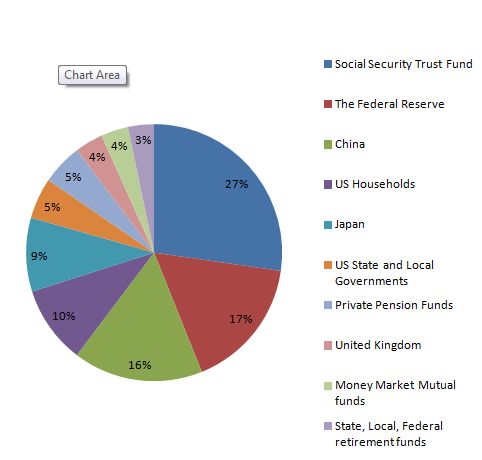 Posted in Federal Budget and tagged us federal debt holders